Excuse me Mr. Trotsky, may I axe you a question?

April 25, 2014
Joesph Stalin was not a man to just let a grudge die. As you will see in a future post I will demonstrate other ways where he would not only kill you but also your memory after you were gone. Indeed, he would try to make sure any trace of you was gone. His rage however, was not something that could be contained by borders of the Soviet Union as demonstrated by the murder of his one time chief rival and founder of the Red Army, Leon Trotsky.

Leon Trotsky was for many years the right hand man of Vladimir Lenin, the father of the Bolshevik Party and leader of the worlds first Marxist nation. However, Lenin did not live long after taking the reins, his health in steady decline from May 1922 and onward after he suffered the first of his three strokes...it seemed that the leader of the Red Army and fellow founding father of he USSR, Leon Trotsky would take the reins as Lenin faded. The Russian Civil War was still on when Lenin had his first stroke and that made Trotsky the second most powerful man politically and with the Red Army at his back, the most capable of dominating rivals with muscle. However after Lenin passed away in January 1924 until 1929, there was a struggle withing the central committee for leadership, and eventually Stalin would conquer his adversaries, many of whom had been by Lenin's side from the early days of the revolution.

In 1928 Trotsky was expelled from Russia proper to Kazakhstan and the following year from the Soviet Union all together and ended up in Turkey first before ending up in Mexico City after being deported from France and Norway for his views and from pressure from the Soviet Government (Norway). Stalin refused to let Trotsky get away with his continued anti Stalinist writings and by 1940, no doubt bolstered by his successes in acquiring new territory in Eastern Europe by cooperating with the Germans, he decided to end Trotsky once and for all. He dispatched an undercover NKVD (precursor to the more famous KGB) agent to Mexico City to assassinate the former Bolshevik leader eleven years after his exile. The method chosen was not clean nor subtle, the assassin snuck in and used an ice axe to assault Trotsky, who would die the next day.

Why the ice axe? No one knows, I am assuming that those are not convenient and common items in Mexico City so it must have been in the instructions. However the assassin was not very good and his attack did not kill Trotsky instantly as intended. However, Stalin tried to erase even the memory of Trotsky in the USSR, removing him from all histories published, and even every single photograph containing Trotsky was edited to remove him, or in some cases replace Trotsky with Stalin in photos that contained Lenin. All former "Trotskyites"were either murdered, sent to gulags, or coerced into swearing loyalty to the Stalinist vision of the Soviet Union. 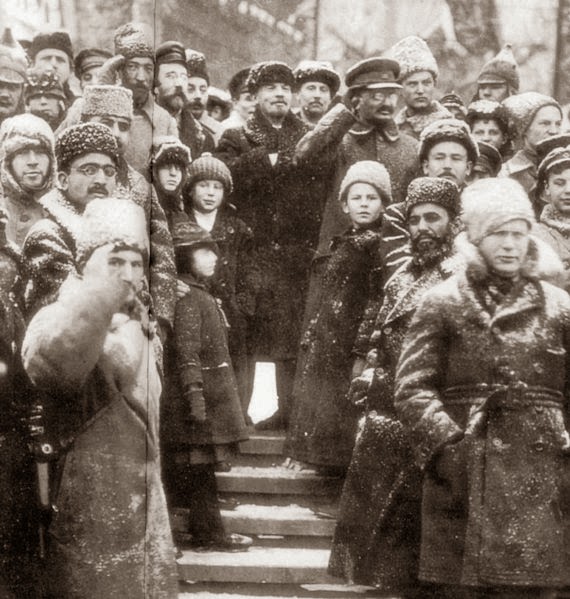 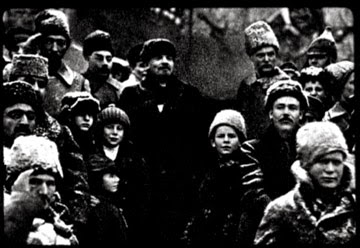 Here is an example. The first photo is of Soviet leaders in Red Square in 1919. In the post 1929 era it was edited to remove Stalin's rivals Trotsky(the one with the glasses to Lenin's left), Kamenev, and Khalatov.
Bolshevik Lenin NKVD Photo censorship Red Army Soviet axe murder Stalin Trotsky