May 21, 2014
So its 2014 and its the 100th anniversary of the start of the First World War...so I am on a kick with the topic. I thought I would write about a legend/myth that happened during the war that injected a big boost of morale into the British Army's Expedition Force in the summer of 1914...the Angels of Mons.

The Angels of Mons originated in the Battle of Mons, which was the first real battle between the very small British Expeditionary Force (BEF) and the Imperial German Army in the third week of August that year. The BEF found themselves greatly outnumbered by the Germans in both men as well as in machine guns. Only the superior training of the British professional army allowed them to hold off the mostly conscripted Germans. The propaganda arm of the British war ministry spun this into a resounding victory, a true David and Goliath story, but it became clear that the public saw through the spin. The idea that the British were going to handily defeat Germany was quickly dying. It was about this time, a month or so later, that a story began to surface in the British press and along the British front in Europe. The original author intended it as a work of fiction, but it quickly morphed into a legend that a beleaguered nation latched onto.

The story goes that during the battle when it looked like British were going to have to retreat or be overrun that shimmering beings appeared between the two armies and a quiet fell across the German side of the front a short time later. The next day the Germans were found slain. The story varies...at first it was ghosts of English bowmen from the historical Battle of Agincourt (fought in that area) that slew the Germans who were full of arrows. Other variations say it was phantom medieval English cavalry from the battle. And other than the ghostly archers the most prevalent one is that it was Angels. This alongside rumors of German atrocities and propaganda campaigns about "The Rape of Belgium" and "The Crucified Soldier" made it seem like god had sided with the Allies against the Germans. What is truly interesting is how even though it started as a work of fiction, many took it to be fact and for the rest of the war occasional rumors of phantom soldiers and beings helping the Allies would surface. At one point the very prestigious Society for Psychical Research, the original paranormal investigators, were called to look into it. They found numerous accounts along the front of ghostly soldiers from the past, but all were second hand stories. 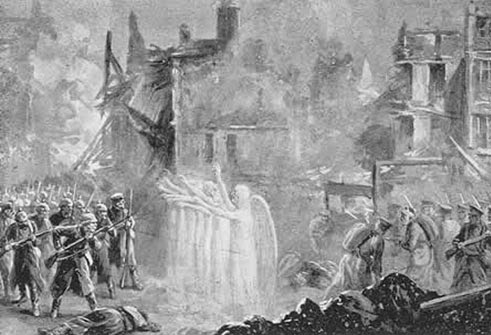