July 30, 2014
If you have ever watched much on the Civil War or on the Wild West, you have probably heard the term "Pinkerton". Back in the 19th century there really was no real nation wide law enforcement agency. There were U.S. Marshals, but they were not organized as a true federal agency until the 1960's. U.S. Marshals in the 18th and 19th century were often ordinary lawmen in territories as well as those who would escort prisoners of the court. The FBI was not started until 1908. This left no nation wide federal law enforcement agency for much of the nation's existence. One man, Allan Pinkerton saw the need for such a well organized agency and created a lucrative business as detectives and security for hire in 1850.

The Pinkerton Detective Agency soon found itself feared and respected. Pinkerton agents were employed by private citizens as well as governments at the local and federal level. They apprehended wanted men as bounty hunters, provided personal security for people and property, and worked as private detectives. When the Civil War broke out the Union utilized the Pinkerton Agency's extensive network of agents as spies and scouts for the Army. Pinkertons, including Allan Pinkerton himself would collect intelligence on Confederate troop movements and strengths for Lincoln and his top generals. Pinkerton was also put in charge of personal security for prominent Generals and Republican Party officials.

Following the Civil War and the assassination of Abraham Lincoln, the Pinkerton Agency largely worked for the private sector. The Secret Service was created to protect the President and the inaccuracy of the intelligence gathered in the Civil War left little government work for the agency outside of bounty hunting. The Pinkertons however were rather profitable, especially with the rise of the labor movement in America. Wealthy factory owners used agents as strike breakers and as intimidation to keep unionization at bay. Ultimately in the 1890's following lots of bad press regarding this area of work the U.S. Government barred any public sector employment of the agency, leading to its decline. But before that happened. in 1884, Allan Pinkerton died an odd death.

All this time you may have wondered where I was going with the title of the entry. Well here is a bit of fun trivia for you now that you have the background on Allan Pinkerton. Of all the bizarre ways a person can pass away, Allan Pinkerton, a wealthy and powerful man died from biting his tongue during a slip and fall on pavement. That is right, he slipped on some pavement, bit his tongue, and it got infected. At this time antibiotics were still almost 60 years away, so any infection could be serious. The infection in his tongue turned gangrenous which progressed into sepsis, also known as "blood poisoning".

So next time says "Bite your tongue", be thankful you live in an age where that would not kill you thanks to antibiotics! 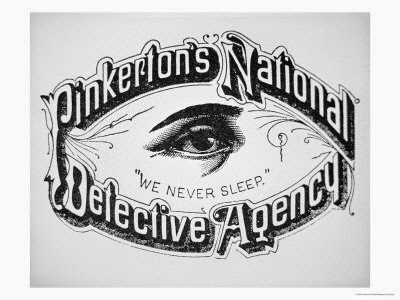