December 16, 2014
Across this land, many of us are getting ready for the impending Christmas holiday. In America we have some interesting Christmas traditions. We have that creepy little elf on the shelf, marathons of movies such as A Christmas Story, A Christmas Carol,  Its a Wonderful Life, etc. We have cute Coca Cola polar bears and shopping mall Santas. Essentially we have a very Norman Rockwell sort of Christmas in the United States. It is nice for the kids and for the whole family. However, Christmas traditions in certain parts of the Old World are just down right dark and/or wrong in comparison. Here are a couple.

In the Netherlands, they have a dynamic duo for the Christmas holiday. There is the usual Saint Nicholas that we know today. The Dutch call him Sinterklaas. And then there is the servant...named Black Pete (Zwarte Piet). Over time the image and background has changed for this character. In earlier medieval times Zwarte Piet was some sort of chained black devil or creature that was captured by the saint. Clearly this tied in well for the very superstitious times of that era in Europe. However, as time progressed into the 16th and 17th century the image of Black Pete changed from a devil to that of a black man. This was of course at a time when the Dutch were prominent slave traders and transporters in the world. So you can see the point I am driving at here...at a time when hundreds of thousands of people were sold into bondage in the New World, the Dutch made sure their version of Santa Claus had a black man servant. This image of Black Pete remains the same today....although instead of using the world servant, the Dutch now use the world "helper".

In other parts of Europe, especially in southern Germany, Austria, and parts of Bohemia they have Krampus. Krampus is essentially a demon like creature that is the anti Santa of the Alpine countries of Europe. While in America we have a tradition of Santa giving naughty children coal in their stockings while rewarding good children with presents, in these countries Saint Nick still rewards the good children. However, the naughty children are left to Krampus. In the Black Forest area of Europe for instance, parents would tell their children that if they misbehaved, Krampus would come and take them from their beds and drag them off into the forest. The image of Krampus is largely borrowed from pagan times, like several Christmas traditions in the region such as the Yule log and the Christmas tree. Krampus is a very demonic interpretation of the horned gods of pagan times. Clearly like many images from the pre-christian era, the church equated them with evil and thus set Krampus as the antithesis of the Christian Saint Nicholas. For a time in the 20th century, Krampus was removed from the holiday. From the 1930's through the 1950's the Austrian government especially tried to end the tradition of having Krampus. However, traditions are very hard to kill and like Zwarte Piet, Krampus is still going strong despite the critics. He is still out there, terrorizing children. He even has his own day on the holiday calender...Krampusnacht falls on December 6th. 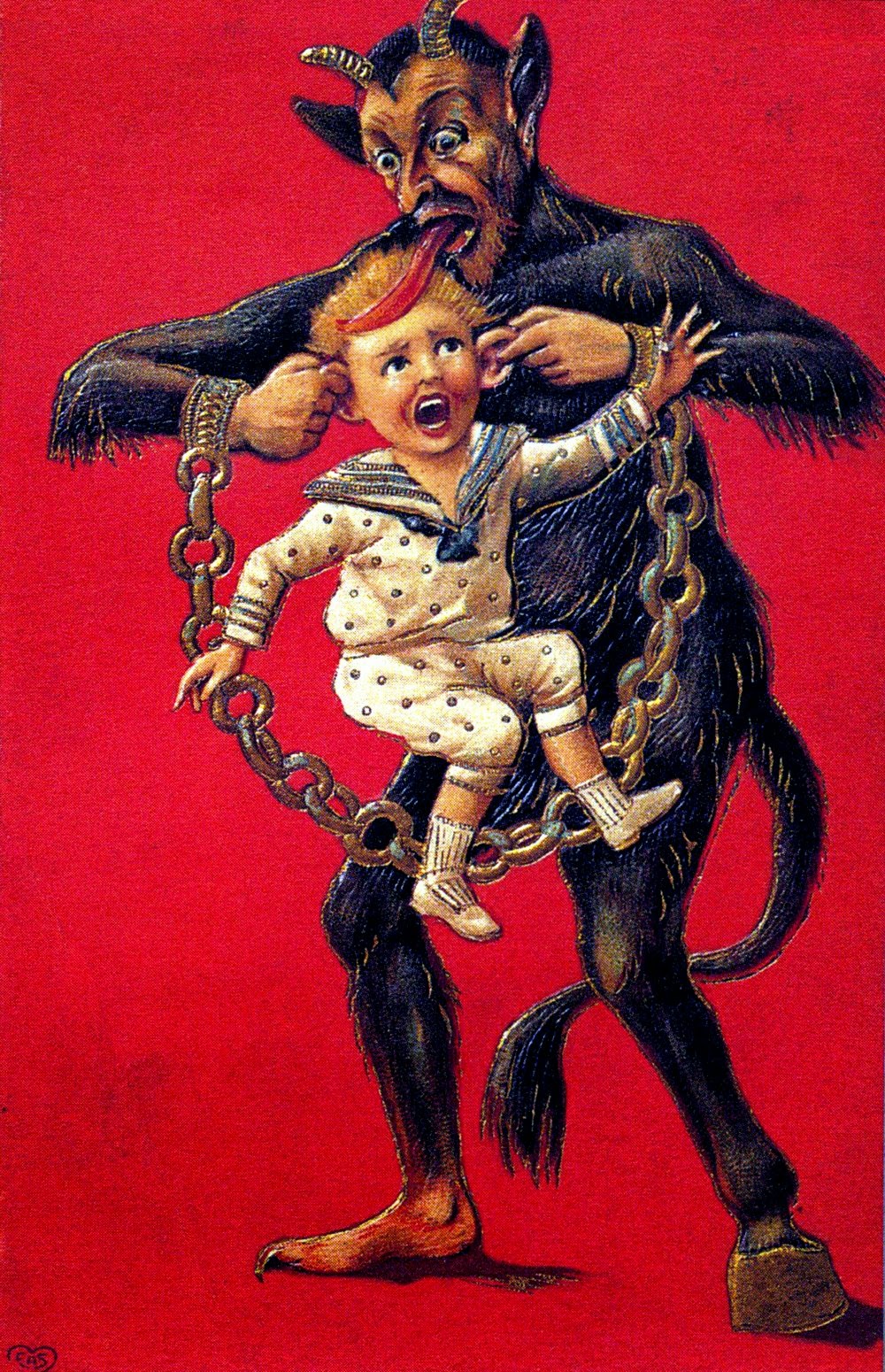 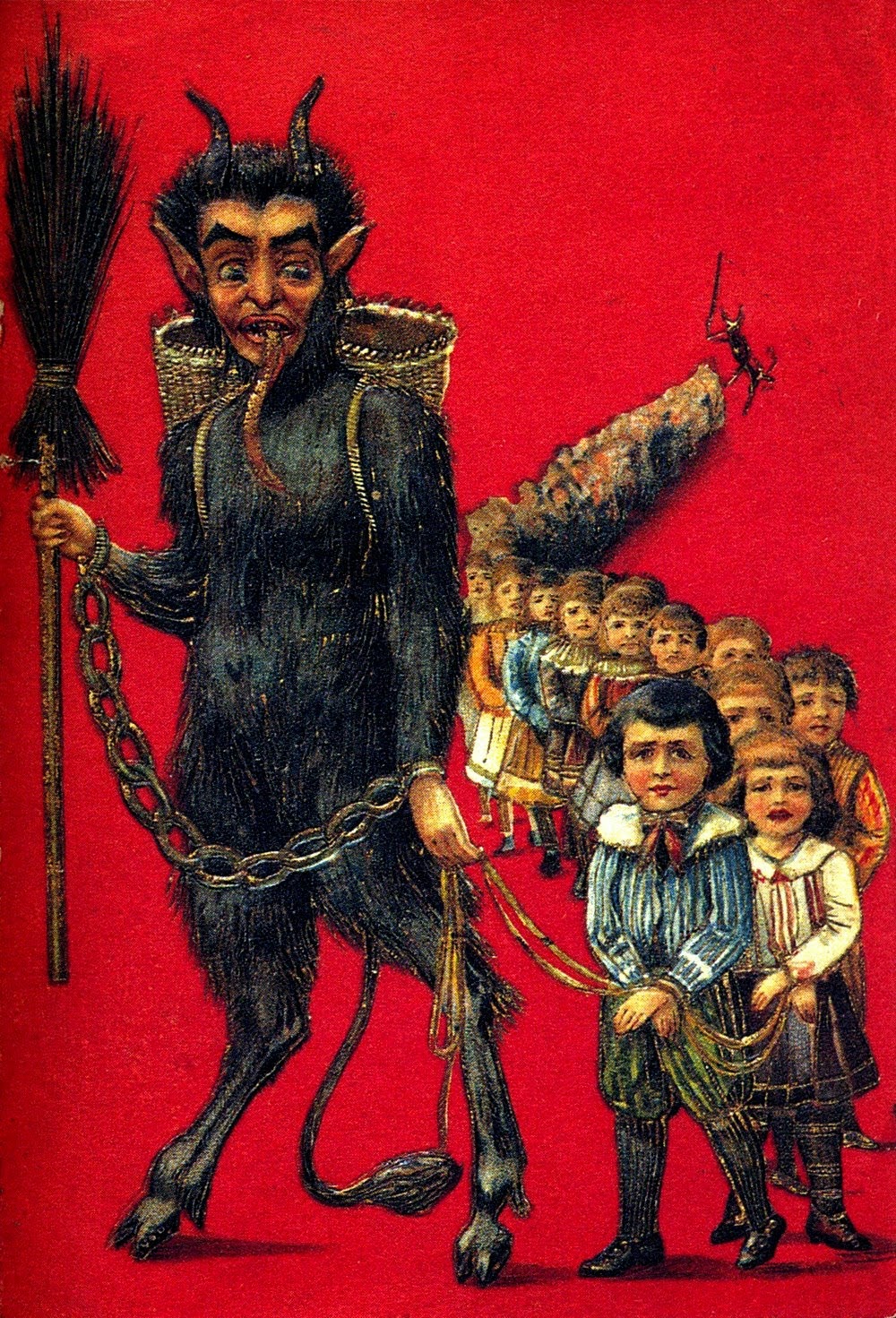