March 27, 2015
The late 19th and early 20th century were the dark age for worker safety in America. Factory workers had made strides by the time America entered First World War. Hours were more humane and pay was more "liveable". The entry of the USA into the European conflict during the spring of 1917 created a great demand not only for products to maintain the war effort, but to replace the men going over to fight against the Central Powers.

Trench warfare was a horrible and ghastly affair. Men died like dogs every day, so any piece of equipment that allowed them to have a better chance of survival was of a high priority. At night for instance, any light would be shot at by the enemy. Manufacturers soon noticed the need for things that allowed soldiers to operate and live in the dark. One was the trench lighter, a way to light cigarettes without an open flame. Another was the use of "Undark", a special paint that allowed just enough of a pretty blue-green luminescence for a solider to check his watch. However, technology had not advanced to the point where these watch faces could be machine produced so droves of young women found jobs hand painting Undark onto the dials of wrist watches in order to keep up with demand.

The problem with Undark was that it glowed in the dark because it was radioactive. The main ingredient being radium, a substance that was new and mesmerizing to the western world at the time. Discovered by the famous scientists Pierre and Marie Curie a mere 20 years before, it was formulated into a paint and used by several firms such as the United States Radium Corporation in New Jersey. At the time there was little understanding about the effects of radioactivity on the human body. Indeed, radium at the time was thought to be good for you and many health products containing radium came on the market. So when the dial painting women at these factories used their lips to get a sharp point on the brushes, they were not concerned. After all, they had seen radium promoted in various ads and articles as fix all cure and the little extra exposure was seen as beneficial. People were drinking radium laced mineral waters, eating laced candies, and using lace skin and hair products among other things.

However, a few years later after wars end, many former workers began to fall ill. They all exhibited a similar set of bizarre symptoms and it was not long before doctors treating them found a common link...they were all dial painters during the war. Many women were getting weak, suffering dizzy spells, formed tumors, and had massive bone degeneration(especially of the jaw). There were rotting away and dying slow and painful deaths.

Five years after the death of one of the victims, a New Jersey coroner suspicious about the local pocket of similar illnesses sent the exhumed remains to the vanguard of forensic lab in America based at Bellevue Hospital in New York City. The young woman's bones were cleaned and placed on x ray film in a dark room for several days. The radium concentration in her bones was still so strong that they exposed clear images, indicating a massive concentration of radioactive radium.

Using this and other evidence, the surviving dial painters were able to take the United States Radium Corporation and others to court, winning one of the earliest judgements against a company for failing to protect workers' safety. This is one case that literally changed America. All the sick women were given cash up front and a stipend every year as part of the settlement. It also resulted in a better understanding of how radium and radiation affected the human body. Radium is confused for calcium by the body and thus gets deposited into the bones leading to all the conditions and symptoms suffered by the dial painters. The radium had been absorbed by their mouths and deposited in great concentrations into their jaw bones. Radium products were removed from shelves and safeguards put in place to protect dial painters(some factories continued using painters for another 15 years).

So when you are forced to wear safety glasses or a respirator at work, you can thank these "radium girls" for changing the attitude of the American public and American business about the importance of worker safety. Amazingly, a few of those women are still with us, some have beaten the odds and despite their exposure reached ages over 100. 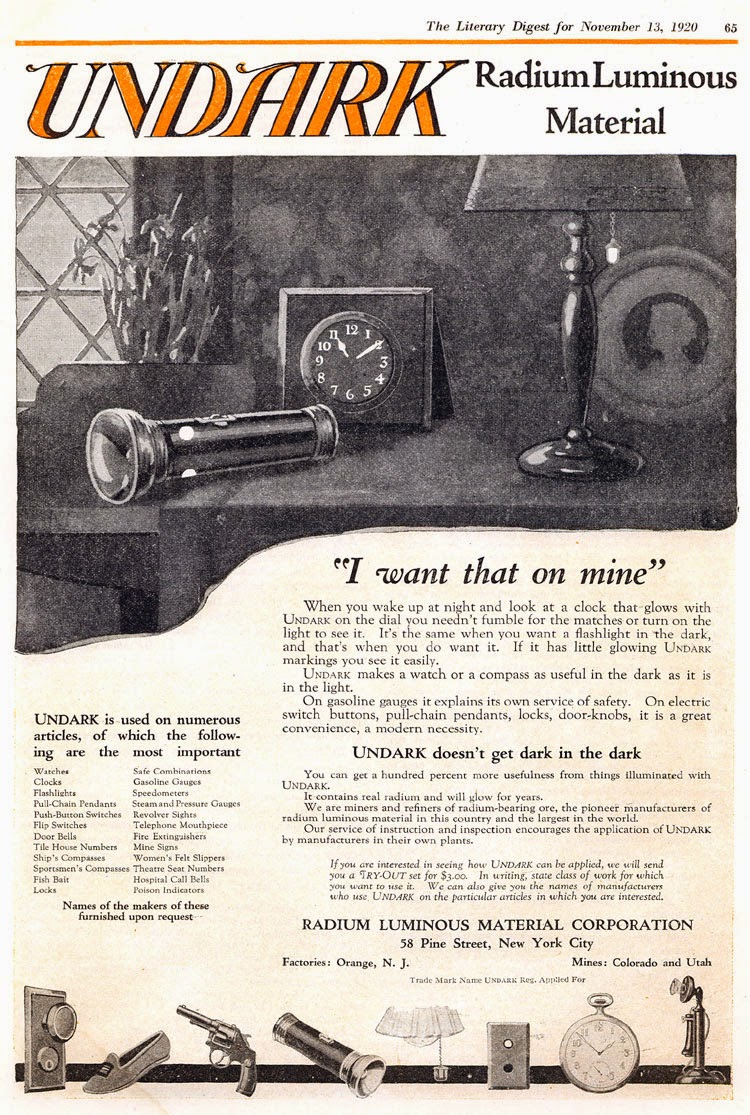