March 25, 2015
Pardon the long period between posts. I was feeling a smidgeon burnt out and needed some time to find/remember a good story. And just a bit ago my memory was jogged out of thin air.


Maybe you have seen these things called the "Bios Urn". Basically it is an alternative means of dealing with the remains of a loved one. For those people that wish to be closer to nature when they pass, they have an alternative to traditional ash scattering. These new urns basically use your cremated remains to turn you into a tree when you pass. You plant the urn and a tree grows using the material(some of which is the deceased's ashes) to remember those that have passed. This is a story about how someone else used trees remember something long gone...the Studebaker forest.

Studebaker was one of the pioneers of the automobile industry in the United States. In the days of horse driven travel it was at one time the world's largest manufacturer of vehicles. It transitioned to automobiles about the same time as Ford was taking off. While it was always smaller than the big three of General Motors, Ford Motor Company, and Chrysler, it was one of the few outside makers along with American Motors to survive well into the post World War Two world. It was also unusual in that it was headquartered outside Michigan, instead being located in neighboring Indiana. However as time dragged on, the fortunes of the company became increasingly worse.

By the time the the calender read 1960, the company was bleeding money. While the cars manufactured were still of a high build quality, the company was falling behind the other auto makers. Studebaker simply did not have the research and development money to keep updating their cars as regularly as the big three who were also engaged in a price war. So the styling continued to lag behind and sales continued to slump. By 1963 there were rumors that the company was fighting for its life and buyers fled to other makes rather than be stuck with an "orphan". Shortly before Christmas of that year the company closed down its American plant in South Bend. It managed to limp on a few more years producing cars in Canada, but by 1966 the company was dead and its assets sold off.

One company that ended up with Studebaker assets was the Bendix corporation, a maker of automotive parts. It acquired, among other things, the old proving/testing grounds where Studebaker tested prototypes. In 1937 Studebaker had planted nearly 5,000 trees on the grounds that spelled out "Studebaker". Over the decades following its demise, the surrounding area grew in with trees and the name slowly melded into the forest. Bosch ended up buying the complex from Bendix and ran it until 2011 when it was closed for good. In 2013, the site was restored and the trees spelling out Studebaker emerged clear. Ironically nearby, an automotive graveyard of rare production and prototype models was found....with one being rescued and restored. 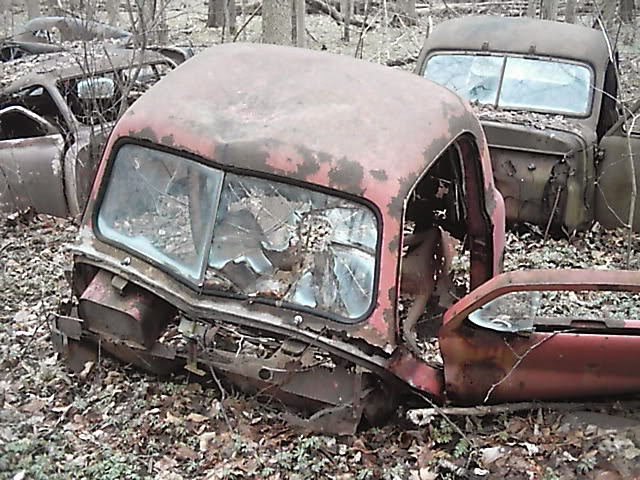